Small businesses may write-off up to $500,000 for capital expenditures

Section 179 is an incentive created by the U.S. Government to encourage businesses to purchase equipment.

Section 179 allows you to write-off up to $500,000 on qualifying equipment. Since this is a small business incentive, there is a dollar-for-dollar phase out after $2 million in purchases. Plus: the Bonus Depreciation  deduction is equal to 50% of the qualifying property’s cost.

As of today, the ‘Small Business Jobs and Credit Act of 2010’ has extended the increased limits through the end of tax year 2013. Unless it is extended, the Section 179 Deduction phases out to an immaterial amount after 2013. So if you want to take advantage of the higher limits in the 2013 tax year, you need to act before the end of the year.

The Section 179 Deduction has been significantly enhanced in 2013, giving businesses an incentive to invest by financing or leasing new equipment.

2013 and 2012 Limit on equipment purchases = $2,000,000
This is the maximum amount that can be spent on equipment before the Section 179 Deduction available to your company begins to be reduced.

The above is an overall, “simplified” view of the Section 179 Deduction for 2013. For more details on limits and qualifying equipment, as well as Section 179 Qualified Financing, please read this entire website carefully.

Here is an example of Section 179 at work: 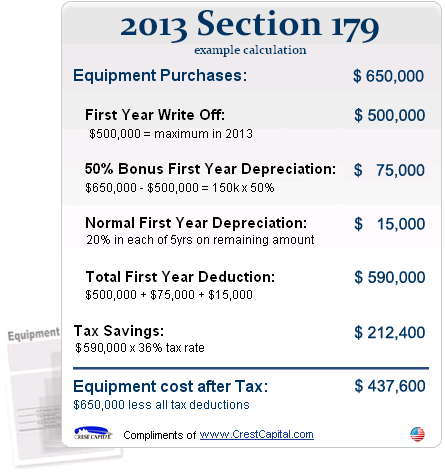 Business owners who acquire equipment including machinery, computers, and other tangible goods, usually prefer a substantial deduction in a single tax year, rather than a little at a time over a number of years. This accelerated deduction is known by its section in the tax code: a Section 179 deduction. An extension of The Small Business Jobs & Credit Act of 2010 provides key tax incentives for investments in new business equipment. This legislation gives business owners additional tax deduction and depreciation opportunities through December 31, 2013.

The law also maintains a 50% bonus depreciation deduction plus the normal accelerated depreciation on the balance of the cost.

The benefit of a Non-Tax/Capital Lease is that it can take advantage of Section 179: expense up to $500,000 if the equipment is put in use in 2013. In addition, you may depreciate any excess on the depreciation schedule for that asset. Examples of Non-Tax/Capital Leases include a $1.00 Buyout, an Equipment Finance Agreement (EFA), and a 10% Purchase Upon Termination (PUT) Lease.